The struggle for freedom has a new victory with the commutation of the Puerto Riccan Oscar López Rivera’s sentence, after he spent 36 years in jail in the US for defending Puerto Rico’s independence.  The World Peace Council joins all those in solidarity with the anti-colonial struggle and right to self-determination, as well as those defending the political rights of activists such as Rivera. Read the statement of the president Socorro Gomes below. 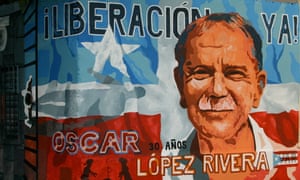 The struggle for freedom achieved a new victory with the commutation of Oscar López Rivera’s prison sentence, after 36 years in jail in the United States for defending Puerto Rico’s independence from US control. The World Peace Council joins all those in solidarity with the anti-colonial struggle and for the right to self-determination, as well as for the political rights of activists such as Rivera.

The Puerto Rican independentist was arrested in 1981 and was, until his commutation, granted by the outgoing US President Barack Obama, one of the world’s longest-serving political prisoners.

Rivera has participated in acts of civil disobedience and peaceful militancy, later joining the Armed Forces of NAtional Liberation (FALN), which brought him the conviction of “seditious conspiracy”. Captured by the FBI, in 1981, Rivera was sentenced to 55 years in prison.

The UN Committee for Decolonization has approved resolutions over the years recognizing the Puerto Ricans’ right to self-determinantion, but the US Government has dodged its colonizer role.

Peace movements all over the world greet Rivera’s liberation and mobilize not only to celebrate this important victory, but also to support and express solidarity with the Puerto Rican people in their struggle for independence!

We salute the brave Puerto Rican independentists and all anti-colonial struggle, which is still ongoing in this very 21st century!